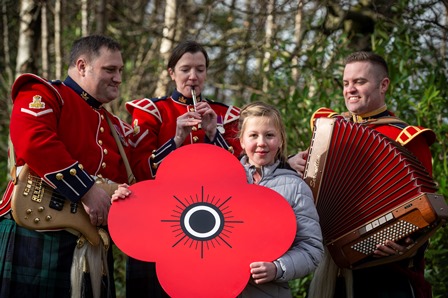 Scotland’s best-known military band has teamed up with leading Armed Forces charity Poppyscotland for a landmark performance at Hamilton Town House this April, which kicks off a nationwide concert tour.

The Band of the Royal Regiment of Scotland is probably better known for ceremonial performances at Royal Palaces and State events, but the tour offers the public a better insight to their extensive musical repertoire.

Scotland’s State Band will perform folk music inspired from across Scotland, from Burns Country and the Western Isles, to the Highlands down through the East of Scotland and the Scottish Borders. The tour is a collaboration with renowned folk musician and songwriter Alan Brydon.

All proceeds from the concert will help Poppyscotland deliver its vital, life-changing support for members of the Armed Forces community across Scotland.

The Band is one of the 22 Regular Army bands and is based at Dreghorn Barracks, Edinburgh. It comprises 45 talented musicians who are also serving soldiers and it is a symphonic wind band with the additional capability of a Ceilidh band. The main role of the band is to support the Army, the State and Ceremonial occasions that occur within Scotland.

It also performs all over the world. In recent years, the Band has travelled to Hong Kong, New Zealand, Switzerland, Liechtenstein, Germany and Canada. Every year, it performs at the world-famous Edinburgh Military Tattoo in front of sell-out crowds at Edinburgh Castle during the capital’s Fringe Festival. And now they are coming to the Hamilton Town House!